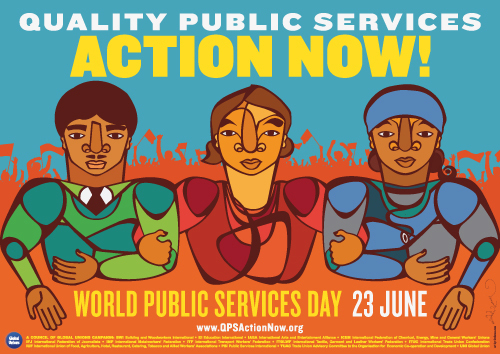 The Council of Global Unions will launch the worldwide Quality Public Services—Action Now!campaign on Thursday 23 June, United Nations Public Services Day. The aim is to advance quality public services for all people through unprecedented coordinated solidarity action across borders.

From the American Midwest to the Middle East, Asia to Africa, Europe to South America – private and public sector unions are uniting as never before to defend and advance the quality public services that keep communities strong. Unions are working with a wide range of allies including municipal governments and civil society groups to build sustainable economies that benefit all people – not just a select few.
In South Africa, this means local unions are working with the Durban eThekwini municipality and community partners to advance affordable housing and reliable public water, electricity, sanitation and transport services through a campaign initiated by Public Services International. In Cape Town, this includes providing books to build public libraries in a partnership effort between Education International affiliates and the civil society organisation Equal Education.

In Bangkok, Thailand, railway workers who are members of the International Transport Workers’ Federation are marching with public sector unions to reinforce their message of protest against government privatisation plans.

In Spain, where youth unemployment is shooting past 40-percent under austerity measures imposed by the European Union and the International Monetary Fund, leading public and private sector unions are joining forces under the Quality Public Services—Action Now! banner to advance a new social and economic vision.

Solidarity exchanges between American, European, Middle Eastern and North African unions will take place in the coming weeks. In Egypt, leaders of the American Federation of Teachers, whose members in Wisconsin have been stripped of their collective bargaining rights, will meet with the independent Egyptian unions whose call for a general strike proved to be the decisive moment in toppling their country’s corrupt regime earlier this year. However, Egypt’s transitional military council has just banned strikes and sit-ins.

Italian trade union leaders, who are celebrating a national referendum victory that halts moves to privatise water, expand nuclear power, or allow politicians impunity – will visit unions in Wisconsin and across the United States to share experiences and strategies.

The Council of Global Unions has issued a solidarity statement reinforcing the commitment of all global unions to back the joint resistance of private and public sector affiliates and citizens to attacks on working peoples’ rights and cuts to public services in Wisconsin.
Government and trade union leaders from Colombia, Peru, Ecuador, Bolivia and Venezuela are meeting in a bipartisan effort to promote social dialogue and innovative proposals for quality public services across the Andean region.

Ukrainian unions are implementing new strategies to convince central and local governments to provide quality, affordable public services as the basis for decent work, quality of life, democracy and social justice.
In Fiji, where the government just passed a law denying public sector workers the right to collective bargaining, sick leave, anti-discrimination or dispute resolution measures, and inIndia, Japan, Lebanon, Bulgaria, Lithuania, Morocco, Mauritius, Russia, Uganda, the Netherlands and elsewhere, union and community members are standing together on 23 June to defend the right to decent work and to reclaim public services for the common good.

“When we look around the world today, we find peace and improved equality and opportunity only in countries where strong public services provide equitable redistribution of wealth, protect democracy and deliver security, justice and decent work,” Council of Global Unions chair Peter Waldorff emphasizes.

“We need priority investment in quality public services to create jobs and stimulate sustainable economic growth and development. Spending on clean energy, water, health care, education infrastructure and transport is an investment in our collective future.”

The Quality Public Services—Action Now! campaign is guided by principles outlined in the Geneva Charter on Quality Public Services. Of key importance, public funding must be supported by fair taxes based on ability to pay, an end to shifting taxes from corporations and the super-rich to ordinary people, and a crackdown on tax dodgers who hide their profits in foreign tax havens.

Leading up to the launch of the Quality Public Services—Action Now! campaign on 23 June, global union members are participating in the European Trade Union Confederation Day of Action on 21 June and the Global Day of Action for a Financial Transactions Tax on 22 June.

Trade unions, political and civil society partners are invited to associate their related campaigns or to start new initiatives under the Quality Public Services—Action Now! campaign banner, and are encouraged to sign on to the Geneva Charter on Quality Public Services today. More campaign information, posters and talking points are available atwww.qpsactionnow.org (Please note that you will need to register on the site to create a campaign).