Tarek al-Tayeb Mohamed Bouazizi (29 March 1984 – 4 January 2011; Arabic: محمد البوعزيزي‎) was a Tunisian street vendor who set himself on fire on 17 December 2010, in protest of the confiscation of his wares and the harassment and humiliation that he reported was inflicted on him by a municipal official and her aides. His act became a catalyst for the Tunisian Revolution[2] and the wider Arab Spring, inciting demonstrations and riots throughout Tunisia in protest of social and political issues in the country. The public’s anger and violence intensified following Bouazizi’s death, leading then-President Zine El Abidine Ben Ali to step down on 14 January 2011, after 23 years in power. 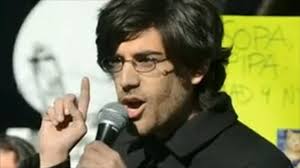 Swartz was a member of the RSS-DEV Working Group that co-authored the “RSS 1.0” specification of RSS,[2] and built the website framework web.py and the architecture for the Open Library. He also built Infogami, a company that merged with Reddit in its early days, through which he became an equal owner of the merged company.[i] Swartz also focused on sociology, civic awareness and activism. In 2010 he was a member of the Harvard University Center for Ethics. He cofounded the online group Demand Progress (known for its campaign against the Stop Online Piracy Act) and later worked with U.S. and international activist groups Rootstrikers and Avaaz.

On January 6, 2011, as a result of a federal investigation, Swartz was arrested in connection with systematic downloading of academic journal articles from JSTOR.[3][4] Swartz opposed JSTOR’s practice of compensating publishers, rather than authors, out of the fees it charges for access to articles. Swartz contended that JSTOR’s fees limited access to academic work produced at American colleges and universities.[5][6]

On the morning of January 11, 2013, Swartz was found dead in his Crown Heights,Brooklyn apartment, where he had hanged himself.[7][8][9] Following his death, federal prosecutors in Boston dismissed the charges against him.[10][11]

Tarek and Aaron had many differences. One was coming from a poor Muslim working class family and the other from a Jewish middle class one. One had a good education, lived in the USA and had a chance to travel other countries, while Tarek was earning his life as a street vendor in Tunis. But they also had many in common. They were both standing against the injustice and the rule of 1%. They have both fought back in their own way. And they ended their very young lives when they were both 26 as result of their fight. They both did this in January; one in 2011 and the other in 2013.

Tarek’s death on January 4 2011, has triggered the still unfolding global uprising. May be the most important event so far for our civilization, not since the Russian Revolution alone but may be for all times. It has started in North Africa, spread to Europe and the USA and from there spread all over the world.

What has been connecting the acts and destinies of Tarek and Aaron lies in the commonality of their fights against the same enemy. Geopolitical and systemic struggle of the ruling elite, capitalist class, 1% what ever you call it, toward ordinary people, the poor, was connecting Aaron and Tarek in their fights back against the source of injustice. The ruthless offensive of the elite has brought more and more oppression on the factories, homes and streets on informal workers and vendors, as it did on the cyberspace on hackers and free information activists.

It was not coincidence that the Wikileaks cables was the ones sparking the protests in Tunis in one of which we have lost Tarek. Since than Julian Assange and Bradley Manning has been illegally prisoned, tortured mentally and physically. The unprecedented state terror and criminality was manifesting itself in massacres delivered by drones, controlled cowardly from miles away,  in order to guarantee power and profit for the state and corporate elite.

Aaron’s murder is one of the last example of such state and corporate terror.

Although we are extremely sad and angry for the memory of Tarek and Aaron, which came on top of the murder of the millions of civilians in last years, we are not mourning.

Anonymous is growing enormous in number and in its capacity. Horizontal movements, like Occupy and 15M are morphing,  expanding and linking with others like yo Soy 132, Via 22 and  indigenous movement like Idle No More, as well as self-organizing Wal-Mart workers. Grass-roots activists, movements, the precariat, the proleteriat, indignados and indigenous is holding hand in hand to get back the planet and guarantee a better world.

We are getting ready to hammer down the elite in the years ahead.

As Tarek’s act sparked the massive uprising in global terms, Aaron’s act will trigger a qualitative leap in the growing of the global intifada. As Aaron’s practice indicated, not only academic, medical, scientific information and public records must be re-covered and released, but all the data originally created by and belonging to the people but hold by governmental agencies, corporates, military and intelligence services should be reclaimed and hacked for the good.

Anonymous Project Meyhem 2012 has laid down the idea.

Now for Aaron, for Tarek and for those hundreds of millions innocent lives who murdered in cold blood, those billions of children who left to death in careless and hunger throughout the human history by the 1%… the time has come to make them pay back!

Today it is the day to revolt, the day to expand the intifada on every bit of our lives, spaces and relations we have on Earth. It is time to leak it all and it is time to bring about the global revolution on the Net and on the Streets!