Join citizens, farmers, NGOs and trade unions from across Belgium to fight back against the EU’s destructive austerity policies and its attempt to give corporations the keys to Europe through a new EU-US free trade deal: ****BLOCKADE THE EU SUMMIT – 19 DEC 2013!****

The day of action is organised by the D19-20 Alliance, and is part of two days aimed at fighting the EU’s ultra-neoliberal austerity policies and for democracy, food sovereignty and the future of the planet. 18th December

– Meeting Against Austerity Representatives from different sectors of European society will be speaking about how the impacts of ultra neoliberal austerity policies are felt on a daily basis. 18:00 – Bvd Roi Albert II, 5, 1210 Brussels 19th December –

Blockade of the European Summit From 7am on December 19, strategically picked cross-roads will be blockaded to prevent our so-called leaders reaching the European Summit and push on with their damaging neoliberal agenda. More details will be announced in the following days, but until then, spread the word, tell your friends, colleagues and families, get your organisation to sign-up, put up posters, print out flyers, book the day off work! 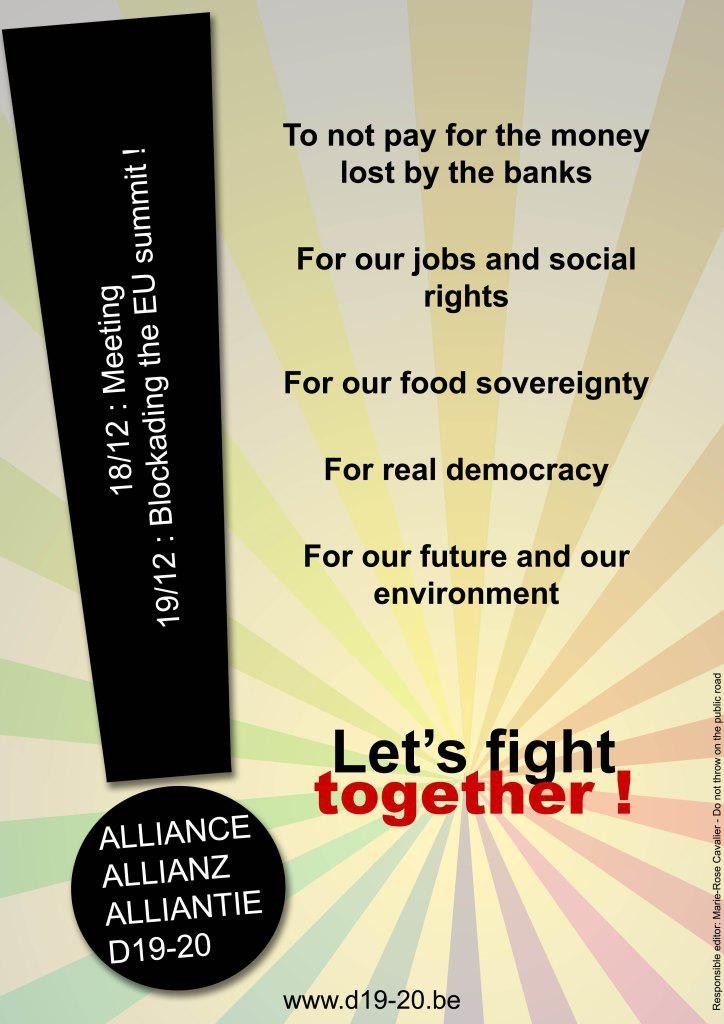 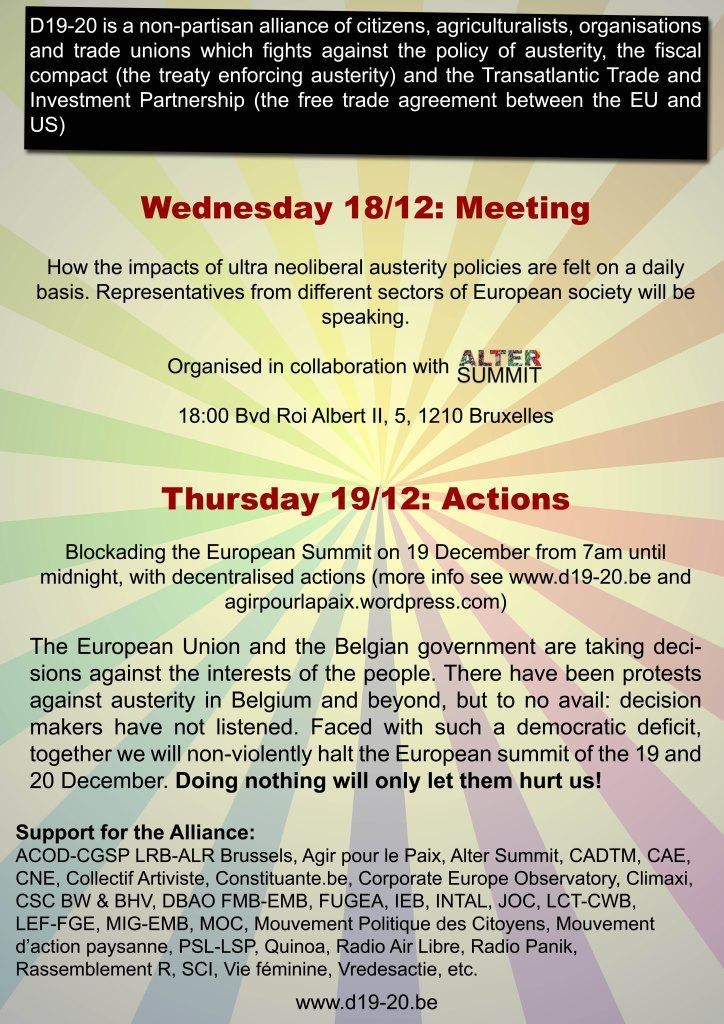 D19-20  is a non-partisan alliance of citizens, farmers, NGOs and trade unions fighting against austerity policies, the TSCG (national treaty establishing austerity in Belgium) and the Transatlantic Trade and Investment Partnership (TTIP – the EU-US free trade agreement currently being negotiated).

Following the call from the D19-20 platform in October, many representatives and active members of Belgian civil society gathered to build a broad coalition and a counter-balance against the attacks by the European Union on all sections of the population. The first assembly was attended by over 80 people representing farmers, citizens, working people, the unemployed, artists, trade unions, NGOs, social movements, community organisers and activitsts etc.

All responded to the call because of a shared belief that the time has come to join forces rather than each fighting in silos for sectoral victories. Those in attendance took turns at the podium to affirm their commitment to converge their struggles and to create unity against the ultra-neoliberal austerity policies embodied in the TSCG treaty and the Transatlantic Trade and Investment Partnership (TTIP); they pledged to fight for democracy, food sovereignty and the future of the planet. All called on Belgian civil society to come together and raise the pressure at the national level, specifically disrupting the European summit on 19 and 20 December in Brussels.Concretely, it was decided to organize a meeting on December 18 bringing together European and Belgian voices from diverse backgrounds to highlight the consequences of policies pursued by the European Union and to organize one or more actions to stop the EU summit taking place on 19 and 20 December.

Faced with neoliberal logic that’s destroying our democratic, social, economic, ecological and cultural future, we will resist and show that there is an alternative!